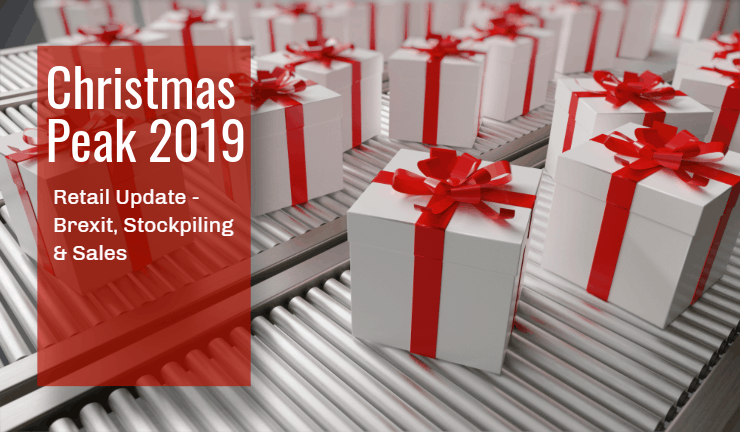 ARE STOCKS FOR CHRISTMAS PEAK 2019 ON TARGET?

A March 2019 Brexit survey from the Chartered Institute of Procurement & Supply (CIPS) showed that some 60% of UK manufacturers and 48% of UK retailers reported that they had been increasing stocks of goods and materials well in advance of the October 2019  Brexit;

The most recent CIPS survey in October 2019 found that 48% of UK businesses said their Christmas preparations were not affected at all by Brexit and  21% of UK and EU supply chain managers said they were importing their Christmas stock earlier to avoid border disruption.

In September 2019 major retailers such as supermarkets Asda and Morrisons, as well as Kingfisher reported a dip in sales  as consumers were reluctant to spend at a time of heightened political and economic uncertainty. The British Retail Consortium reported a 1.3% drop in sales overall in September 2019 over the same period last year. Although Barclaycard, which handles almost half of all credit and debit card transactions as Britain’s biggest credit card provider, found that total spending rose modestly (by 1.6% year on year to September 2019).

A recent CBI survey  (of 82 firms, which included 41 retailers as well as wholesale distributors) also showed that retails sales declined for a sixth consecutive month in October, down by 10% from the same period a year ago. Retailers said they expected sales to rise of about 1% forecast for November.

However, the new Brexit date of 31 January 2020 will have provided some much needed optimism for UK retailers –  Christmas retail sales [retail sales occurring in the six weeks from the middle of November to the end of December] are still  forecast to increase by 0.8% from £79.72bn in 2018 to £80.27bn.  Peak food and alcohol sales also extend to the New Year.  It is not yet clear what impact the General Election on 12 December 2019 will have on Christmas retail spending.

CONTACT Ten Live Now To Plan Ahead For Christmas Peak