In March 2019 UK manufacturing experienced a surge in production amidst fear of a no-deal Brexit according to a key industry performance indicator –  the  IHS Markit manufacturing purchasing managers’ index which rose to 55.1 in March, up from 52.1 in February. This was the highest reading for 13 months. Any number above 50 indicates expansion in the sector. 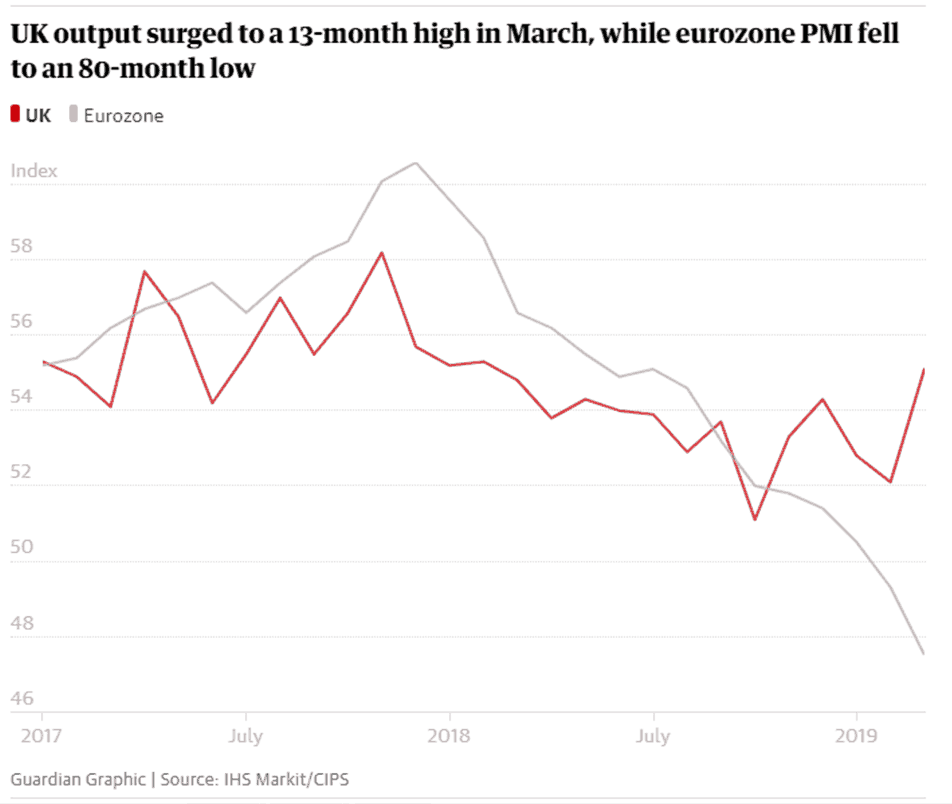 UK manufacturing currently remains a key industry in the UK, generating around 10% of total economic output and supporting around 2.7 million jobs.

March’s  increase was due to UK manufacturers ramping up output of their products amidst fears of a no-deal Brexit, with companies rushing to complete work before the deadline of 29 March 2019 when the UK was due to leave the EU. However,  the UK has still not left the EU two years after the UK started the exit process by invoking Article 50 of the EU’s Lisbon Treaty. The EU withdrawal agreement reached between the EU and UK has been rejected three times by UK MPs.

Having granted an initial extension of the Article 50 process until 12 April 2019, EU leaders have now backed a six-month extension until 31 October 2019. However, the UK will leave before this date if the withdrawal agreement is ratified by the UK and the EU before then. Under that scenario, UK manufacturing businesses that participated in the IHS Markit survey warned the March increased output was likely to prove temporary and could reverse if a Brexit deal between the UK and the EU is finalised, Q1 2019 overall performance was similar to Q4 2018 and could dip next quarter.

A number of manufacturing companies have already they announced they plan to leave the UK or are considering it. Also, a number of UK manufacturers are stockpiling , with orders and outputs unaligned going into 2019.  Sectors such as basic metals is a sector most likely to see a negative trend, reflecting the expected decline in orders.

Labour turnover in UK manufacturing increased for the second year in succession in March 2019 as employees took advantage of a buoyant jobs market and skills shortages to move jobs, according to Make UK, the UK manufacturers’ trade body.

Turnover (the number of people leaving companies through resignation, redundancy, retirement or dismissal) rose to 14.4% in 2018, up from 13.2% in 2017. This reflected the buoyant jobs market with high levels of employment and skills shortages meaning there are greater numbers of opportunities for highly skilled employees to choose from.

Seamus Nevin,  Chief Economist at Make UK, said: “The number of people in work has risen to a record level yet again and Brexit is clearly not stopping firms hiring staff. For manufacturers, in fact, it is the opposite. Investment in recruitment is really the only major area of business spend at the moment. Preparations for potential trade disruption in the event of a No Deal Brexit are in full swing and employers are hiring staff to help them get over the line”.